Linda started singing before she could walk. She has a wide vocal range and loves to perform all types of music. Her influences include, Linda Ronstadt, Anne Wilson, Karen Carpenter, Stevie Nicks, Sheryl Crow, Sting, The Eagles, Journey, & Pat Benatar. Linda has performed the National Anthem for Sam Houston Race Park, Houston Aeros hockey games and also for Pace Motor Sports in front of sold out audiences in the Houston Astrodome. She was a top 10 Finalist in Houston Pride Idol in 2009. In addition to singing with August 83 & Spare Parts, She was also the lead singer for the popular Houston band Hippie Chick taking on the role of lead singer Ann Wilson.  Linda is married to August 83 guitaist/vocalist Mike Lambert and they have two sons.  August 83 is named for the month and year that they were married.  Together since High school choir, they have been performing for over 30 years. 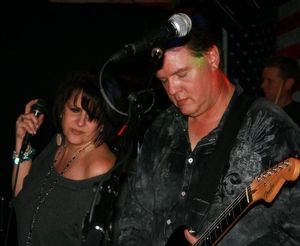